Dandruff on the Shoulders of Giants 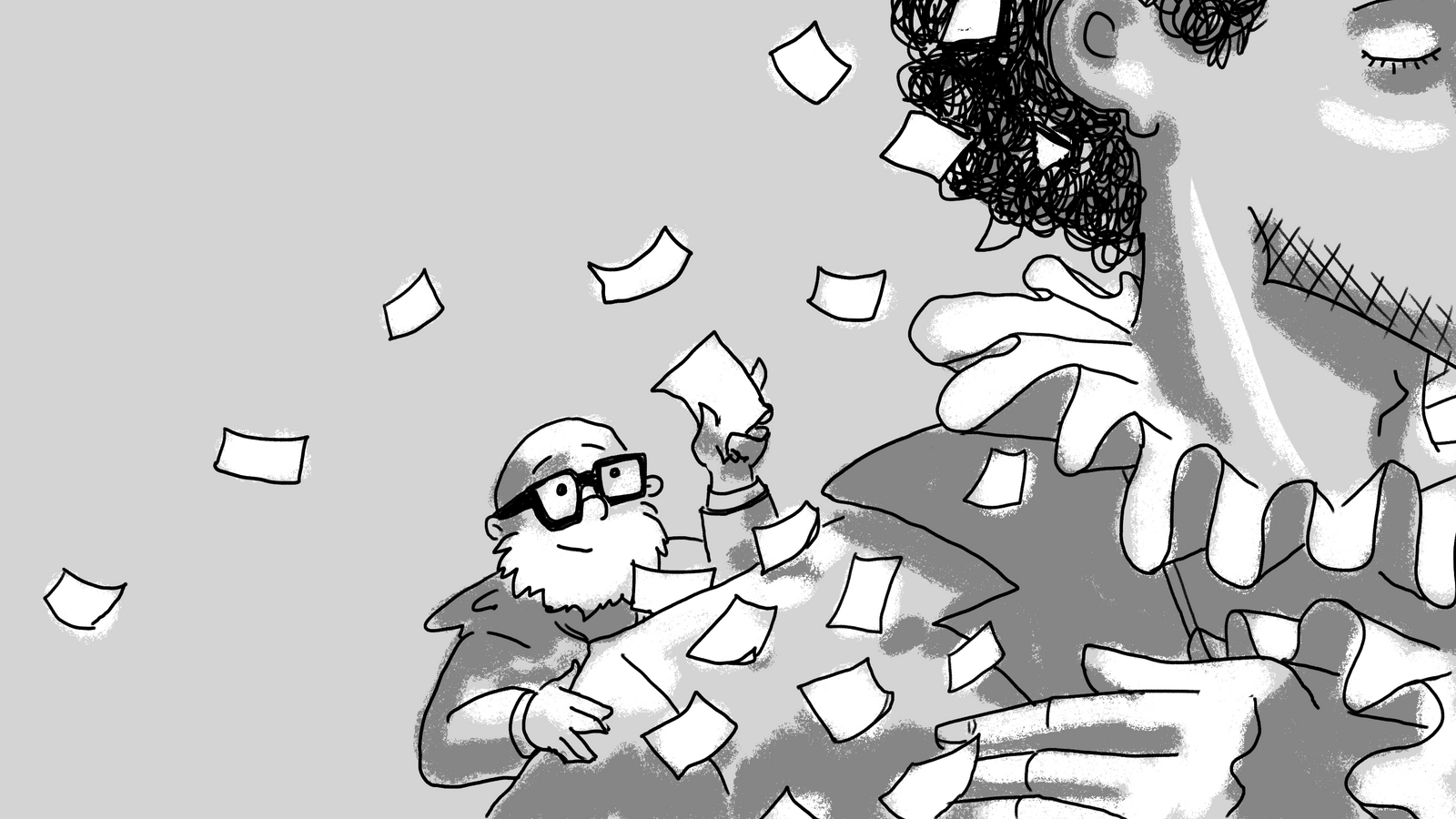 Many of the authors you might think of as wildly original are steeped in the tradition of dissecting and riffing on the work of other writers. We're awash in well-sampled literary mash-ups and many of us don't even know it.
It's not much talked about; we adore the myth of the self-made-up man. But if so many of our wordsmithing heroes re-mixed the greats, maybe it's time to consider what we could comfortably "get away with" ourselves.
Is it like standing on the shoulders of giants only to find them covered in dandruff? Or is this really fresh-fallen powder we can cut new tracks through down the mountain slopes of our work?
Let's look at some examples of great writers taking this approach, with an eye to practices we can try ourselves.

Steven Pressfield used the structure of the Bhagavad Gita to write The Legend of Bagger Vance. He writes about it in The Authentic Swing where he calls it "Ripping Off Krishna."

One day on an airplane I thought, "I’m gonna steal this. I’m gonna use the structure of the Gita to write a story about golf." Instead of a troubled warrior, I’ll make it a troubled golf champion. And instead of the warrior receiving spiritual instruction from his charioteer, he’ll get it from his caddie.

This gave me tremendous confidence, even before I had written a word. Because I knew I had a timeless structure, a timeless theme, and timeless archetypal characters. I had the clothesline. Now all I needed was the shirts, the socks, and the underwear.

Before him, Faulkner said:

And before him Igor Stravinsky said:

A good composer does not imitate; he steals.

Neil Gaiman melded the Cthulu mythos with the Sherlock Holmes story "A Study in Crimson" and begot "A Study in Emerald". He happily calls it fan fiction—but it won him the 2004 Hugo Award for Best Short Story and the 2005 Locus Award for Best Novelette, not accolades known for applauding merely derivative works.
John Gardner turned Beowulf on its head and wrote from the perspective of the monster, making the poetically hysterical masterpiece Grendel.
William Shakespeare especially loved a good remix. Amanda Mabillard says in "What Inspired Shakespeare":

From great classical authors like Ovid and Seneca, to English historians like Holinshed, Shakespeare's greatest influences were the works of other great writers. With the exception of A Midsummer Night's Dream, Love's Labour's Lost and The Tempest, which are wholly original stories, Shakespeare borrowed his plots, down to fine detail.

Sean Connery's curmudgeonly character in Finding Forrester advocated for the practice of using a text as a runway from which a student could take off to explore their own skies. This advice got his student in a heap of trouble because the student didn't prune "the runway" from the work he handed in and that triggered the alarms of plagiarism. But in the end, there was redemption, so it's all good.

Consider the practice of typing out a whole book, copying it word for word, start to finish. On the one hand, it may seem like draconian typing practice, but it's actually an amazing way to get close to an author's wordplay.
Artists have been making master studies of drawings or paintings as part of their training for centuries. They aren't copying or tracing; they are noticing. Lines, tones, negative space, layout; great work merits a closer look.
Performance artist Tim Youd is typing out 100 novels in 10 years. As of this writing he has typed 52 classic novels. A bit of theater, but he's not alone.
Joan Didion retyped Ernest Hemingway.
Even Hunter S. Thompson typed out A Farewell to Arms and The Great Gatsby. He had this to say about it:

I just wanna feel what it feels like to write that well . . . If you type out somebody's work, you learn a lot about it. Amazingly it's like music.

Type It Til You Make It

Something is happening here, a kind of fake-it-til-you-make-it with tracing paper. Our brains must be lighting up as we copy in a similar way, at some level, to the original author's. Typing like this can't help but groove a bit of graffiti from a favorite mind and etch it into our own. This sort of grooving happens all the time with the accumulation of accidental habits, but now we're doing it on purpose. To learn. To work out. To practice.
TypeLit.io exists to help you learn typing by copying literature. They have dozens of novels to choose from, including 1984, Frankenstein, and Marcus Aurelius's Meditations.
Typing isn't required, you could just as well write out novels longhand. Might make a cool gift.

There's a variation where you can read a paragraph then try to write it down from memory. When you misuse a similar, but different word, pause. Why did you write "chartreuse" instead of "viridian"? Why "fat" and not "plump"? Consider why they author picked the latter. Repeat until you not only have the paragraph memorized but until you can rewrite it, perhaps even pausing between words considering, as the original author must have, the dazzling field of options.

Of course, there's always a higher level to aspire to. In Borge's story "Pierre Menard, Author of The Quixote," Menard's ambition is to write, word for word, Don Quixote:

He did not want to compose another Don Quixote—which would be easy—but the Don Quixote. It is unnecessary to add that his aim was never to produce a mechanical transcription of the original; he did not propose to copy it. His admirable ambition was to produce pages which would coincide—word for word and line for line—with those of Miguel de Cervantes.

"I would only have to be immortal in order to carry it out."

And Borges wraps the story with the observation that Menard's contribution wasn't so much his ambitious text, but rather his close reading.

Menard (perhaps without wishing to) has enriched, by means of a new technique, the hesitant and rudimentary art of reading: the technique is one of deliberate anachronism and erroneous attributions.

So now it's your turn.
Find a text you admire and read, perhaps again and again, perhaps typing madly along to the audiobook, perhaps doodling marginalia of structural and thematic notes, perhaps stunning the neighbors with memorized passages, perhaps endeavoring to become the kind of person who would have inevitably written that very same text yourself.
But at some point, a few words in or after a month of close reading, leap off, accept your mentor text like an inviting wind: lean into it and fly.
‍